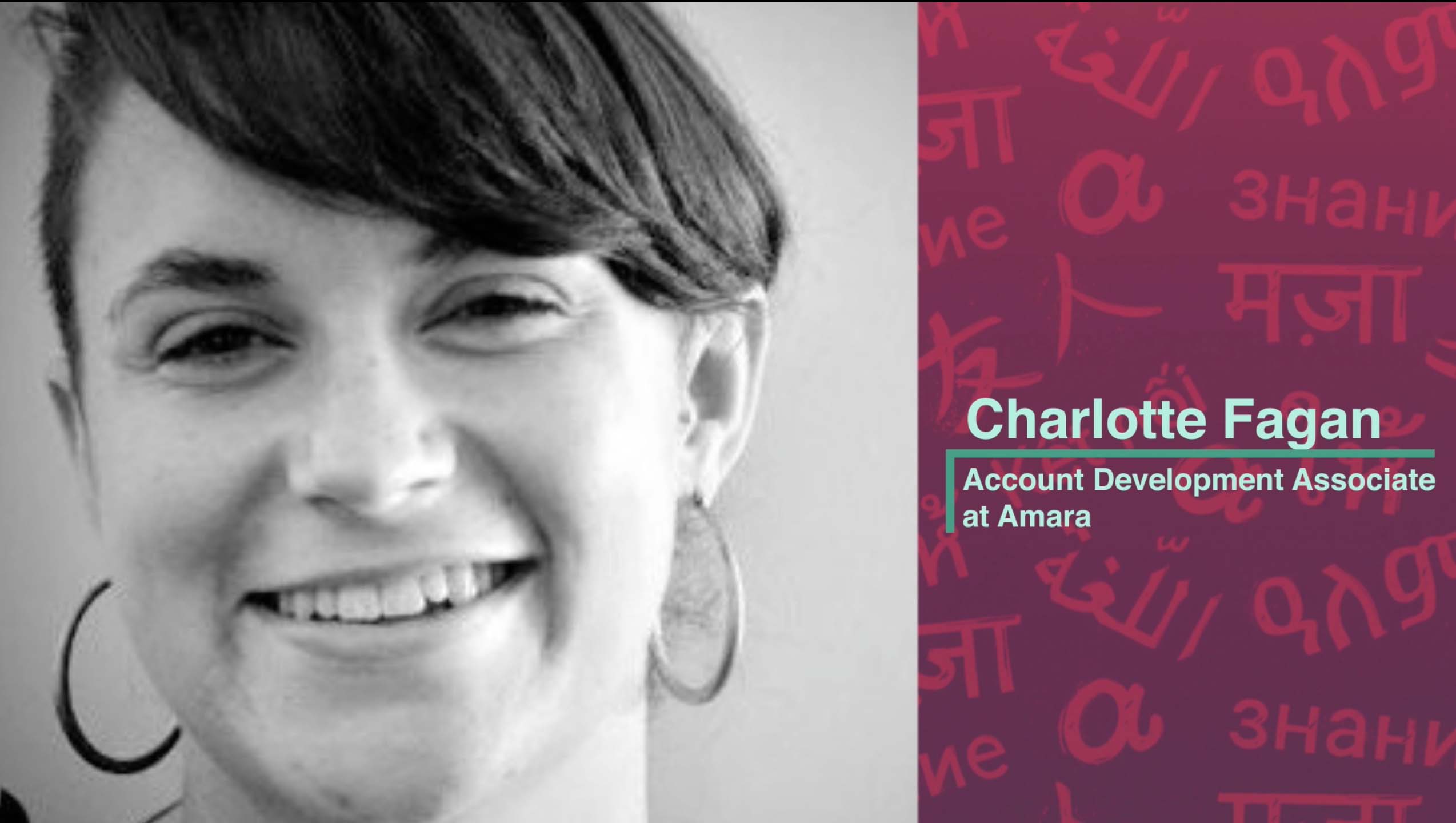 Meet the Amararians| Charlotte Fagan: So much content is only available in English!

You use Amara for your video projects, you contribute your efforts to translations and captions, and you enjoy the captions created by our community. But did you ever wonder who is “behind the scenes” at Amara? As it turns out, they are a bunch of cool people with interesting stories to tell!

So, let’s demystify these invisible magical unicorns who secretly contribute to Amara with our Meet the Amararians series! Today we are going to have a conversation with Charlotte Fagan, Account Development Associate at Amara.

When did you start working at Amara, and why did you decide to work for this organization?

I’ve always worked at mission-oriented organizations, and I feel really passionate about mission-oriented work. I was drawn to the mission of Amara because, for a long time, I have been making a lot of videos, putting them online, and editing them. I’m very interested in how translation happens on Youtube.

I used to work on a project about bike mechanics and made bike mechanic video manuals, then translated them into different languages. So when I saw this job posted at Amara, I thought, wow, this really combines a lot of my interests.

Do you have your own Youtube channel, or do you edit video for another organization?

And sort of related to that, I used to work at an organization here in Boston called Bikes Not Bombs, where we worked on this video mechanics manual and thought a lot about how do you reach different audiences around the world.

Because so much of the content about bike repair available in Youtube is only in English, we started producing videos that were also available in Spanish, and those videos were really popular.

Those are probably the most popular videos that I’ve worked on, on the Bikes Not Bombs Youtube channel.  I also have a series on Vimeo, and my username is called Woman on a Wheel, which is my blog about women’s cycling culture around the world.

So following up on that, I also noticed that you are part of a project called Femmechanics. Can you talk a little bit about that?

So four years ago, I started a group in Boston called Femmechanics, a group of femme, trans and women cyclists, and we bring people together to learn about bike mechanic skills and also to go on rides together and do social events.

The main goal of the group is to provide a space for femme, trans, and women cyclists to come together and build community and to build leadership in the bike world. I’m really proud of Femmechanics and what we’ve done in Boston. In fact, I just taught a mechanic workshop earlier this week, it was really exciting.

How can we participate in Femmechanics?

You can find out more about Femmechanics on www.femmechanics.wordpress.com, and you can also follow our Facebook page or Instagram under Femmechanics. Femmechanics is a group primarily for femmes and trans or women cyclists. We try to make it clear that we’re not just a group for women but a group of people of a lot of different gender identities and that everyone is welcomed to be part of the group.

In addition to the Femmechanics, we know that you have also participated in a lot of different bike-related activities and initiatives. You have another project called Village Bicycle Project, can you talk a bit about that?

Training women to maintain and repair their bicycle means that they count on it as a long-term tool to improve their livelihood. #womencycling #women #girls #girlswithbikes #sustainabletransport #sustainabledevelopment #movement4mobility #bicyclesaroundtheworld #bicycle #Ghana #SierraLeone

Sure. I joined the board of Village Bicycle Project in December of last year. I’m very proud of the work that we’re doing as an organization. I was first involved with Village Bicycle Project when I volunteered with them in Sierra Leone in 2013. What we do as an organization is we provide bicycles to rural areas of Sierra Leone and Ghana, and sell bikes at a discounted rate in these rural areas where farmers and students really could use bicycles as their primary form of transportation. They’re doing great work and I’m really excited to be a part of the organization.

So here’s another bike related organization that you founded called Carishina en Bici? What does that mean? And what does it do?

So Carishina en Bici is also interesting since Amara works with translation. Carishina is a Quechua word used among the indigenous community in South America. The literal translation for Carishina into Spanish is “A woman with little abilities in the kitchen”, and it’s often referred to women who in English you would call tomboys, etc.

I was in Ecuador working at a bike shop and a customer came in, saw me working on a bicycle and said, “que carishina”! Which is really meant as an insult, but I kinda liked the word. So some friends and I got together and formed this group called Carishina en Bici and we organized a lot of different events to get more women riding bikes in Ecuador.

We’ve talked about a lot of the bike-related experiences that you’ve had, what inspired your passion for bicycles?

Uh, I am very passionate about bicycles and these are only even a few of the bicycle organizations that I’m involved with right now. I got really excited about bicycles because I went to college in Minnesota in the Twin Cities, which are famous to be a really great place for biking. And all of the cool people were biking. So I started biking.

When I started biking, it was something that made me feel really powerful, and it made me feel strong and empowered. It made me feel like I belonged in the public space and on the street. And there’s something about that feeling that sort of never got away from me and that I still feel about riding bicycles.

There are so many reasons why I think subtitling and captioning is really important. I think it sort of goes back to this project I was working on with this bike mechanics manual. There is just so much content that is only available in English.

That means that as more and more people around the world have access to the Internet, mostly through smartphones, the possibility of the Internet to be a place for education, to learn about other places to access new ideas is greater than it’s ever been before. But when it’s not available to people in their local language, we really lose that opportunity. And so I’m really excited and passionate about the idea of how do we make the Internet more accessible to more people in their languages.

To follow up on that, we know that you speak both Spanish and English. Is there any content in Spanish that you enjoy a lot and think is worth to be translated to another language and share it with more people?

That’s a really good question. It’s funny, I learned a lot of Spanish through watching Telenovelas and watching Spanish TV.

Here’s a fun question, have you ever been involved in a language community that is not your native language and made some mistakes or did something inappropriate because of your language barrier?

Yes. I’ve made many, many mistakes. Two come to mind. One is very typical, especially for native English speakers who speak Spanish. You would say I’m embarrassed, which sounds a lot like in Spanish saying “estoy embarazada”. But that does not mean I am embarrassed in Spanish. It means I am pregnant. It’s very different. It’s a very funny mistake that people make all the time. And I’ve definitely made that mistake.
Another time I was living in Beijing and I spoke very little Chinese. And one day I just came out of my language class where we had been reviewing numbers, so I was thinking a lot about numbers and I went to the same store I always go to. And when I was leaving, instead of saying “謝謝”(Xiè xiè, thank you)I said 四四(Sìsì, four four), depending on the tone it either means “four four” or “death death” I don’t know which one I actually said.

It’s a very interesting thing in Chinese culture that we avoid the number four a lot because it’s very similar to death. So for example, in hospitals and other places.

So the last question, I wonder what do you think the future of translation will be?

It’s one of these things where things are changing so quickly. They’re just changing all the time in the field of translation that in some ways it’s hard to know what the future holds.

Overall, I think that translation continues to be more and more important as we have a more interconnected world and as different communities interact with each other more, they need translators in between them. I think in general the future is just the growing importance of translation as a really important localization solution for businesses and in a personal level, as people want to connect with people around the world who speak another language.

So here is a fun question. Do you ever hear of any food that is very unique or hard to translate either from your culture or any food that you thought it’s very special and impressed you?

So the first food that comes to mind is something called Martabak in Indonesian, and it’s this really thick pancake that you put lots of toppings on and they sell them in street carts.  I’ve never had anything just like it. It’s like a pancake sandwich and it’s really delicious.

About Meet the Amerasians series

We want to put a face to Amara by creating stories and interviewing our community members. This is an ongoing project, that introduces our internal staff, volunteers, and other community members who contribute to Amara and the captioning/translating community.

If you know an Amararian who has an interesting story, let us know!